How to create a surface based on spherical triangle corner points

Directional arc on a sphere? Need to show an angle clockwise.

How to color a spherical triangle?

Spherical angles on the surface of a sphere

currently it is quite laborious to measure the angle between two intersecting arcs on the surface of a sphere by having to construct the tangent lines at the point of intersection first and then measure the angle between those. The angle object, since being straight and not curved, obviously touches the sphere in one point only and the larger I make the angle object the more strange and unpleasant it looks. Is there any way to measure the spherical angle and draw a curved angle object following the shape of the shpere? Maybe in future versions of GeoGebra, hopefully...?

Thanks and kind regards

if the center of sphere is out of (0,0,0) you must substract the center to all points in b

sorry, I didn't understand your comment. In the file attached I cannot see the angle object anyway. I basically want to have a curved angle-object. I was thinking one could create a look-alike using the "Surface" command. But I don't really know how to do it.

Thanks and kind regards

I thought you wanted measure of the angle. for a curve over sphera from a spheralsegment to another you can try a curve defined with the points

define a segment from one arc to another then curve/|curve|

you must complete for angles >180º

Thanks again for your time and efforts in helping me! I really appreciate it. :-)

thanks for the new file. And is there a way that I can colour the enclosed area of the sphere between the two (black) sides and the (yellow) arc?

yes, to create a surface

the new course began this morning; when I have time I will try to do it

I think there is a little bug with this form of surface[]; I am waiting an answer

Beyond my level of understanding, anyway... I hope you can provide me with a function or object that I can (foolproof) use on my file... :-)

this is all I can do. open the file, select the last right tool then click on A,C,D,E

but I think there is a bug: when I do several angles with a common point only the last one is updated

wow, looks good. I hope I can develop it further. But what must I do so that I can import this tool into any other GeoGebra file?

Saving the existing tool wasn't a problem. I did that but I haven't figured how to import the tool into an existing file.

simply file open the *.ggt file (to save or not to save is the same)

here are the results

now I am thinking for building spherical triangles

thank you again for attending to my case. I was very impressed with your last file. It is really getting very close to what I am trying to achieve. I am almost there... :-) I do however haven't figured out how to implement this tool into an existing file. I have already a quite complex 3D sphere with lots of objects and don't really like to start from scratch again drawing everything in your file having the tool contained in it. So how can I import the tool into my existing file so that I can draw the 3D angles in my existing file? How can I "merge" the two existing .ggt files, in other words? Sorry for bothering you with this newbee-question.

then clic on file->open->do not save, search the tool on your PC and open

then the tool is merge in your own file

then clic on tools->customize toolbar

in center up select 3d graphics

the tool must be in your menu

then cilc on center of sphere and three points

thanks for the explanation. I got your tool imported now. Sorry that I didn't know how to do it. I will remember for next time.

Anyway, your tool does something on my sphere but unfortunately, it doesn't draw the angles correctly. You invested already a lot of time into my query and I cannot ask you to spend even more time on this. I would just like to understand how you did it because all I can see is a freakin' complicated Surface Tool command. Can you explain what you did there and how this construction command is actually structured? Or is that something really complicated and you just do these things in a couple of seconds in your head? I really like to know how you did this so that I can take it further.

my mother lang is spanish, if you want I can tell a better explanation in spanish lang

(I am talking about the last tool)

the second tool work fine for me. tell me what is the problem

opening the attached in

you must see this

in the attached picture it can be seen that there are parts of the surface area missing. I don't know why this is. It might be because I am rotating the entire sphere by animation.

then change r from 1 to a great number. the surface is partly hidden and the sphere not

yes, you were right! The tool itself works fine. It was the "clipping" that cut off the surfaces. But now everything is so small because I had to fit it in the clipping box. Can I zoom in on the sphere including the clipping box or can I make the clipping box any bigger?

the clipping box has three sizes.

other options must be features from developers

I think I found a solution now that I can live with. A big thanks to you for your help in this matter. I really appreciate this. I hope that in a future version of GeoGebra the angle measuring object will also be curved on a sphere just as you did with your tool. Is there a way to suggest it to the developers?

I think you have done it with the last post

one more question: what would be the command to create a similar surface object that is bound by three 3 Great Circles (as sides of the triangle) between any three points on the sphere?

I am thinking about but I do not get simple way. it is posible using my tool twice with center in the points on the longer side and the same color but it is few elegant

Sorry mathmagic, I didn't understand your last post. Can you explain one more time? I have to use your tool twice. The first point is always the center of the sphere, right? Then its about the three points on the surface. Which point to be selected first? The two points furthest apart? Is that what you are saying...?

OK, I see what you mean. Unfortunately, it does not work for all triangles: 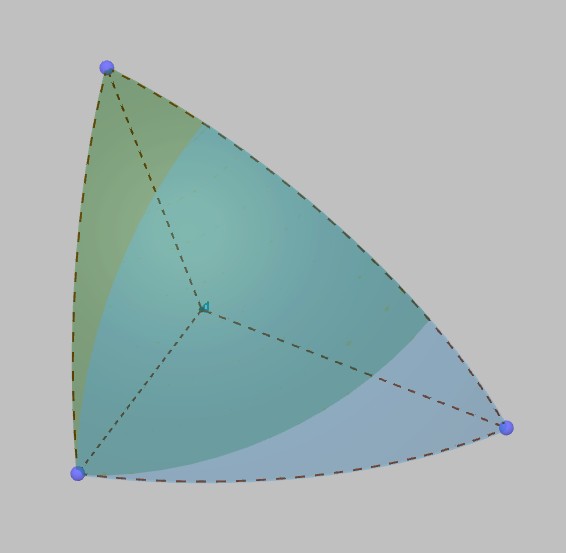 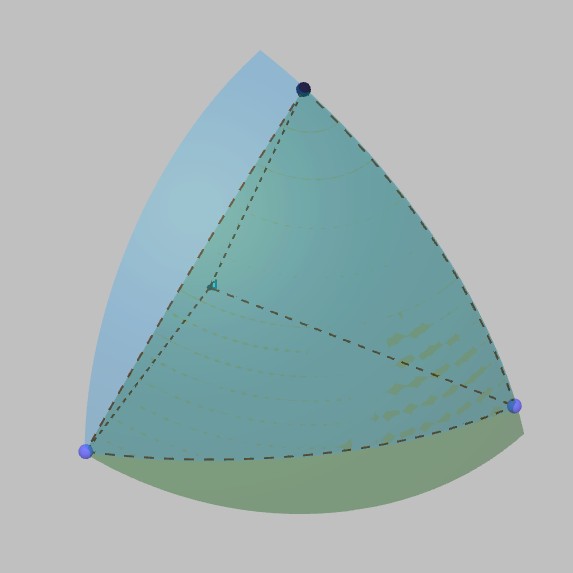 I was searching a simple way to do the spherical triangle, at the end I did the obvious method: the triangle C,D,E (C,D,E on sphere of center A) and dividing by modulus for normalizing. create a = Sphere[A, B] then C,D,E on the sphere and type (better copy and paste )

Would it be possible to convert this into a tool so that one only has to click one center point and any three points on the sphere? You could use the icon that you were using recently for the other tool. The icon shows a green triangle on a red sphere. This icon might be better suitable for this kind of tool.

I am sure that this tool might also be useful to others... !

do the tool yourself

when you have four free points named A,C,D,E create a surface with

Aha! Thanks for the brief explanation on how to do this. It was my first time to create a tool but I finally managed. A big THANKS to you one more time!

modifing the angle3D tool I did this

Cool! Thank you once again mathmagic. :-) Unbelievable what you can do with GeoGebra...

Obviously not only limited to triangles...