To attach the location of a text to a point programmatically

Why rotating 3-point arc in a list generates a complementary arc?

How do you create a cut on a 3D Rotating Ellipse?

Rotating Text About A Point

There are several things I would like to acknowledge concerning Geogebra's rotate commands. I notice that there exists a command that allows you to create text positioned at a certain angle, which is a very useful feature. I also notice that there exists a way to rotate an object about a point--another useful feature. I observe that every text created is associated with a "starting point". My question is, why is it that when I create text I am forced to use the "RotateText" Command? Isn't it possible to create a functionality that will allow text to be treated the same way as objects, that way we can simply use the "Rotate Object About A Point" function for text as well. As I stated earlier, every text created is already associated with a starting point which could act as the pivot for rotating text. Furthermore, the reason I take issue with the "RotateText" command is that once the text is displayed at a given angle, the LaTeX becomes distorted and no longer exists in the same form it would if it were created horizontally: 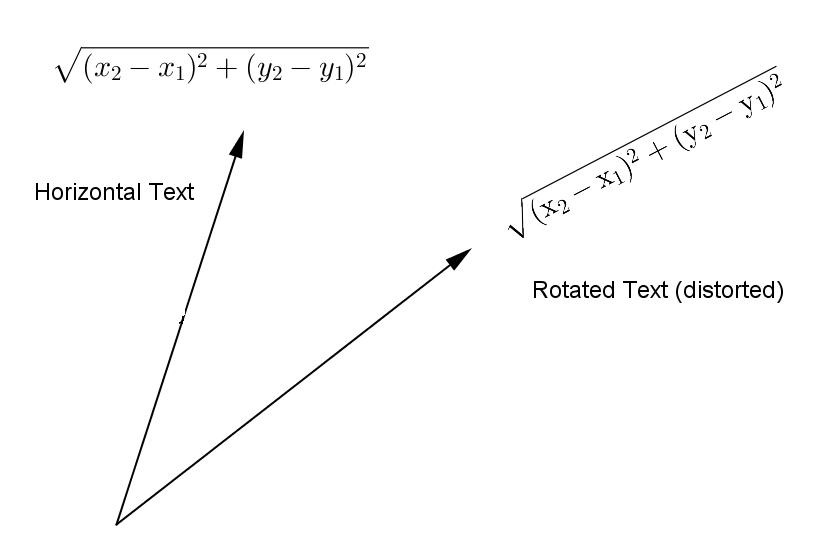 Just wondering if anyone has any thoughts on this at all.

Workaround by making a .png of your text at http://www.sciweavers.org/f... ?

(not very nice but he work)