How to change the Algebra Equation Form type option for Geogebra commands?

There is no option to save many default settings

Is there an option to allow students enter mathematical symbols - similarly to teacher?

I would like to get the angles formatted 0-360º clockwise and 0-360º counter clockwese.

In geology, the trend of a line is always expressed as a 0-360º angle from north and clockwise.

This option is already available. 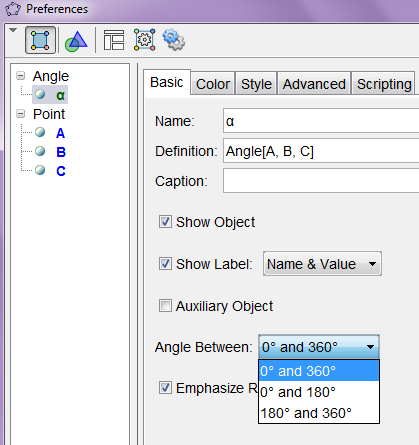 Thas option was not available in my case.

I had not seen that option previously.

I have been investigating about it, when the option appears and when not.

If the points are 3D the option does not appear.

Let me clarify it with an example:

So it seems that that option is only for the 2D modules of geogebra, and is missing in the 3D.

I don't know if there is a good reason for that.

Any way -for the use in this case- I could convert the angle measured to be measured in the 2D plane and get the 0-360 option (as the points where content in the xOy plane).

Thanks for your response, it was of great help.

mmm... I see you have considered this theme previously.

My angle is define by two vectors or three point.

The first vector may define the positive direction, and the clockwise should be for the cross product of first vector by the second.

With three points the first vector may be define from secont to first point and the second vector from second point to third.

Angle in 3D may need a vector associated to indicate the plane in which it is contained and the clockwise direction, if it is saved as an independent object.

May be it should be theated like a Moment: a vector which module is the angle and the direction gives the plane and the clockwise sense.

How is an angle defined in 3D in GeoGebra?

I'm having problems with this too. I've tried the Angle[(Point), (Point), (Point), Direction] command but I still cannot get the angle to go graphically from 0 to 360. Here's my construction, a little playground for Euler's Angles: http://www.geogebra.org/mat... . I'd need both $\varphi$ and $\psi$ to be drawed from 0 to 360. However setting directions (I tried yAxis, yhat vector, xoyPlane) doesn't change behaviour.

Thanks for your time.

"The first vector may define the positive direction, and the clockwise should be for the cross product of first vector by the second."

Imagine two vectors on your screen, first going right and second going top. Then the cross product will go towards you and positive orientation will be counter clockwise. Then if the second vector goes bottom, you would imagine that from first to second would be 270° -- but then the cross product would go in the opposite direction (to behind the screen), so positive direction is now clockwise, and the angle is again 90°.

That's why we provide command Angle[u,v,w] which creates angle between vectors u and v, and uses w for positive direction (w can be a vector or e.g. xOyPlane).

Hi, sorry to bother, but I've tried that already. Which version was this functionality implemented? I'm using latest for linux (debian testing as host OS).

When I use three vectors to define an angle it doesn't complain about a syntax error, but the behaviour is still the same. If you happen to have enough time, could you upload a MWE? I mean, the numerical side works well (even without the third vector defined) but the graphical display of the angle is what's causing problems.

Thanks a lot for your time.

Here you are: you can move points A, B, C in space. Also point D: e.g. if you move it up and down, it will change positive orientation.

Almost 6 month later I gave this a try again. I feel very stupid, but will post here anyway in case it serves someone in the future.

As I had stated, adding a third vector that defined the positive direction for the angle doesn't change anything visually. But, and here is where I feel very embarrassed, it adds the "0-360" option to the "Angle between" entry in the properties.

Problem solved and (better late than never) thanks a lot Mathieu for your time!!!

Happy to see your problem is solved!