Finding the biggest angle between lines

CAS Line undefined at angle of 30°

How do I find the point on a line where the angle between two other points is the largest?

Orientation of angle between lines

Per Svensson shared this question 1 year ago
Answered

This has been bugging me for a while, and I tend to forget the solution from one time to another, so at least this will serve as a note to self.

Whenever I want to mark an angle between two lines, it never seems to appear where I intended. I've come to realise that the position appears to be dependent on the direction of the line. Here's an example:

The four lines are defined as going in different directions, hence the angles end up differently in each case. Limiting the blue angles to 0°–180° just flips them over to the green side.

Let"s say I want to mark all the straight angles inside the resulting rectangle, i.e. getting v13 and v42 to join v21 and v34. Is there a way of achieving this without superimposing four additional lines going in opposite directions?

I guess there is always this method, but it feels cumbersome as well. 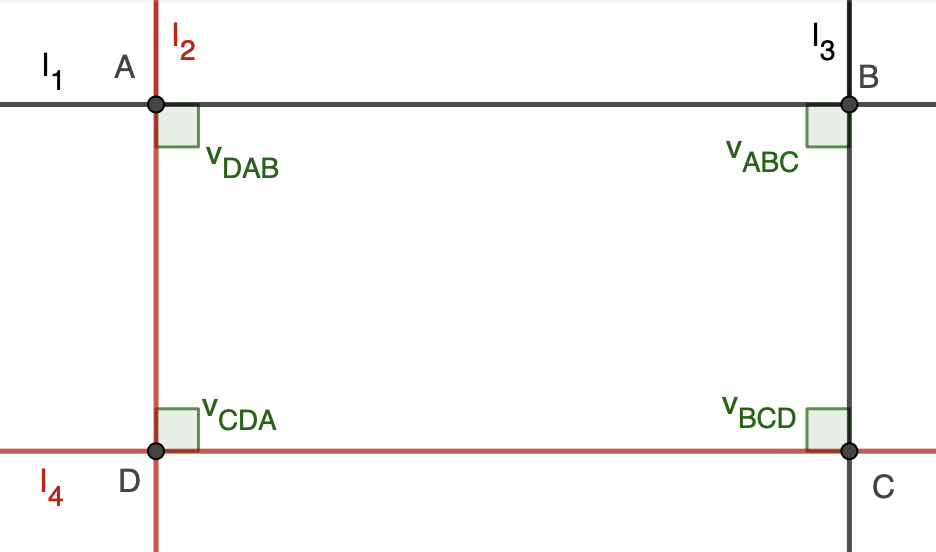 I always use some extra points on the lines to define angles exactly where I want them displayed with Angle(Point, Point, Point) :) keeping in mind that ggb creates angles in counterclockwise direction. I haven't tried creating the unit vectors that define the direction of lines, but this looks a bit more cumbersome to me than just a couple of clicks to create extra points.