No warning when renaming to a special name used by Geogebra

Stéphane_C shared this problem 1 year ago
Not a Problem

I think the title explains well the reason for the problem and how to fix it.

As for the possible outputs of this situation I can't be exhaustive.

The attached file gives an illustration (I use the software in French and I guess the language matters for this bug). In this example a segment is renamed "Droite" but "Droite" is the command used to define a line. Therefore there can be problems when Geogebra is confronted to the command "Droite" (either for a new object or when selecting an existing one), it may show an error warning or interpret "Droite" as the length value of the segment called Droite or interpret it as the command for a line.

I guess there can be many different cases, each command used by Geogebra might as well trigger problems if an object is renamed to the same name. I tried also with "MilieuCentre" and managed to reproduce similar bug with an object firstly defined with the command "MilieuCentre" becoming "non défini" (meaning not defined) after one segment have been renamed "MilieuCentre"

For the story this bug occured to me because the french word "droite" can both means line or on the right side. So in some way in this case it's the french language which is more bugged than Geogebra ! But I guess problems like this one might occur too in other languages, it's probably right to say all languages have their bugs.

Anyway I hope this bug can be fixed and thus make the software better.

Your file loads OK for me (in French). What did you do exactly to get the error?

Please see this topic for a better presentation of this bug.

a segment is renamed "Droite" 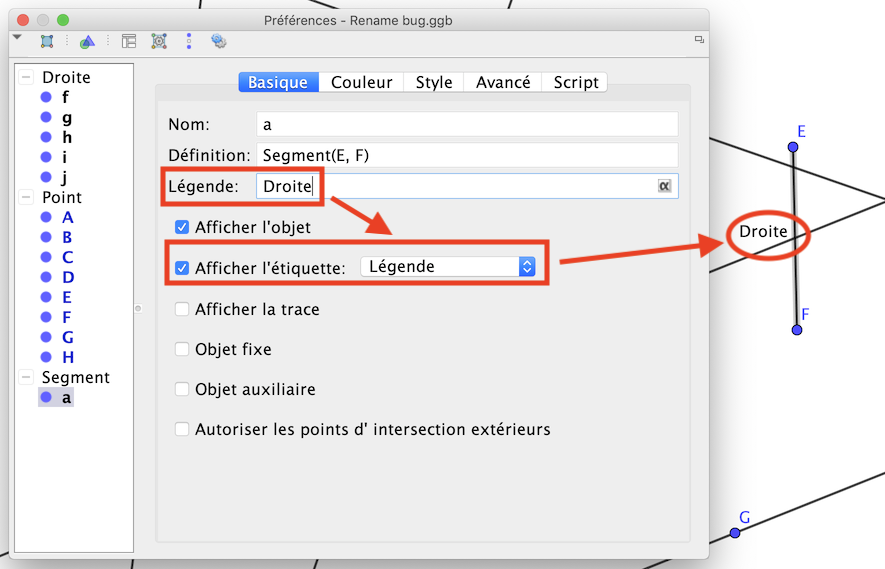