GeoGebra Classroom solutions of a question

saeedaminorroaya shared this idea 10 years ago
Under Consideration

We can already done Physics with Geogebra

or the new geogebra Tubehttp://www.geogebratube.org...

I thing that GeoGebra should concentrate on mathematics. There are already physics-tools the work very well ... I like Phun/Algodoo for mechanical and optical (only Algodoo) problems.

But may be GeoGebra could work together ith thoose tools like offering the possibilty to import data and values. I know that there is/was an idea to let GeoGebra workl with a tracker-software to get data from experiments.

...But may be GeoGebra could work together ith thoose tools like offering the possibilty to import data and values. I know that there is/was an idea to let GeoGebra workl with a tracker-software to get data from experiments.

With all the statistical tools that GG already has, that would be a nice addition

I now such good physics programs like: Algodoo, Yenka and Powder Toy (you can consider it a game).

saeedaminorroaya, how do you imagine this project? What should it include? For example, if you want smth. like the projects up, I think that:

1) the developers won't be able to reproduce smth. like that.

2) it will be absolutely another project.

Physics is 95% mathematics, so we do not need a special version. But the ability to import physical data is really a good idea. Imports from Vernier probes would be fantastic!

Some software (which I would not say the name, no advertising) data acquisition has a spreadsheet and the data can be transferred to the spreadsheet geogebra.

And that works fine. 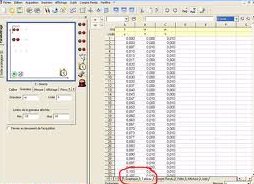 I agree with acron. GeoGebra should concentrate on the mathematics USED for physics: Implement important functions used in physics and - most important - visualize them. And here GeoGebra could be improved indeed a little bit: I miss build in visualization tools for (2-dimensional)

Those are needed to discuss electric and magnetic fields for example.

Does anybody miss such tools, also? I think they would be great. Does anybody know any workarounds?

So ... physicians are needed :D ...
I think there are already some physicists who use GeoGebra. I use it in my courses to show the mathematical relations of Physical phenomena. I confirm that we can already import Physical measures in the GeoGebra spreadsheet to exploit them. I can reassure my mathematicians’ colleagues on the evolution of GeoGebra that already cover numerous Physicals domains. Maybe is it possible to enlarge them (coupled dynamical systems, for example)?
But the ability to import physical data is really a good idea. Imports from Vernier probes would be fantastic!
In fact, there are numerous specialized equipments and software in all the domains of Physics (Optics, mechanics, magnetism…). And GeoGebra is interesting because he makes the synthesis of numerous of these. Would it be so difficult to create additional scripts which allow using directly GeoGebra for classical equipments? That would be fantastic... as said acron! :wink:
Does anybody miss such tools, also? I think they would be great. Does anybody know any workarounds?
Using GeoGebra in Physics is difficult because applications require a very fine knowledge of GeoGebra and also because there are no particular toolboxes (as it exists in other software):

A simple example: if we want to show the movement of a mass suspended from a spring. We spend more time drawing the spring that to represent the solution of the differential equation of the movement. If springs are coupled… that becomes very difficult.

In conclusion, the evolution of GeoGebra is a good thing for Physical Sciences. There are some adaptations to make, and create libraries (thus the styles must transmitted in tools :wink: ), and widen the field of the applications (resolution of systems of differential equations, for example).