Can I Set Caption of added point with Point Tool using GlobalJavaScript?

How to make the text in Caption be the text of a variable?

toggle view between caption and name

Is it possible to be able to edit a caption like text is edited from within the settings of the object itself? That is, have the dialog below available when you want to edit the caption of an object? 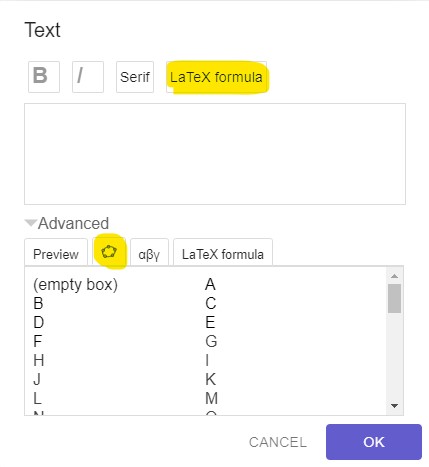 It'd be really awesome to be able to edit a caption as robustly as a text element, and include information referencing other objects in the activity.

I"d like to be able to create a text object for units. Then in the caption of all segment in a prism, have all the captions be %v+units. I feel I know how I could do that with the text dialogue above, but not with the current caption capabilities. I also feel it might be possible now, but with an unruly number of steps.

If the text dialogue/capabilities could be added to the caption of a text from within the settings of an object, that would be great!

You can use LaTeX in captions by enclosing the text in $ $, as well as using some predefined parameters to show e.g. the "value" of an object.

Please see this wiki page https://wiki.geogebra.org/e... for a description of the predefined parameters.

Using the SetCaption https://wiki.geogebra.org/e... command, you can update a caption dynamically, if it contains values which are not directly the object's ones.

Also, input boxes can now have a caption created separately, in a different text.

Having to create a SetCaption script works, but it may need to be placed in the update script of the parameter or parameters that change the object in order for the update to happen correctly.

The text tool function doesn't need that kind of tinkering. Texts created using the text tool can reference multiple different objects update without having to tie an update script to the parameter(s) referred to. It'd just be nice to not have to create a separate script and figure out where to implement it.

It's much easier to create a text using the text tool, create a point on the object, and then set the position of the text to the point created. It'd just be nice to have this kind of ability built into the properties of the object rather than having to create new ones to do so.